Sharing a dinner today that I’ve been making over and over again: seared strip steak with crispy potatoes & mustard sauce. It’s a new york strip steak seared simply with kosher salt and freshly cracked black pepper, served alongside a mixture of roasted potatoes, asparagus, and radishes, and drizzled with a tangy mustard caper sauce. Great for both weeknight cooking or a special weekend meal. 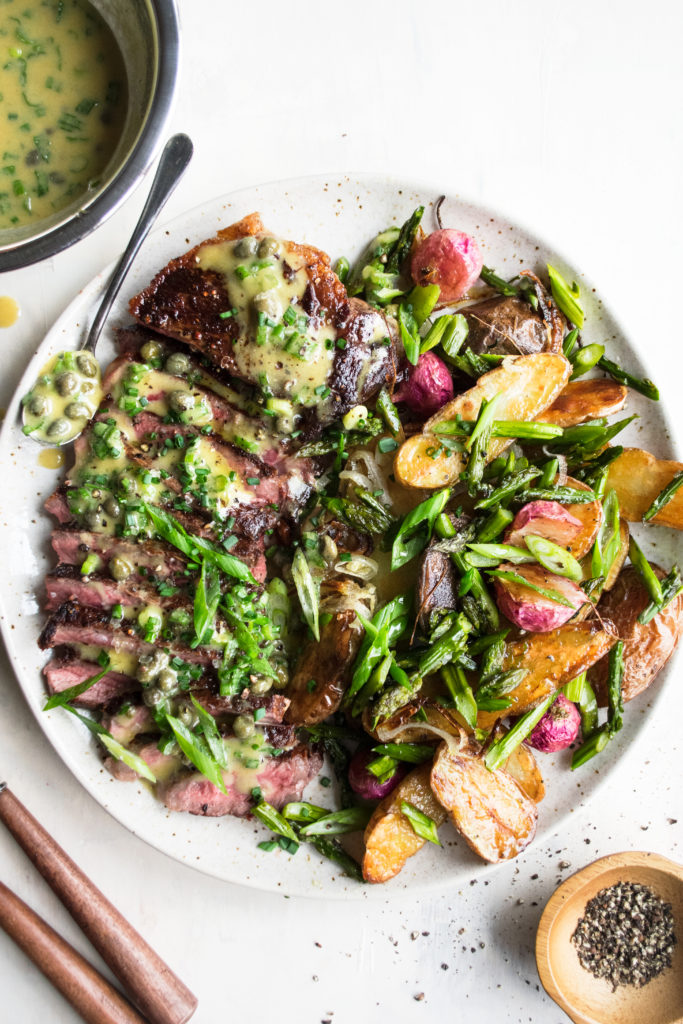 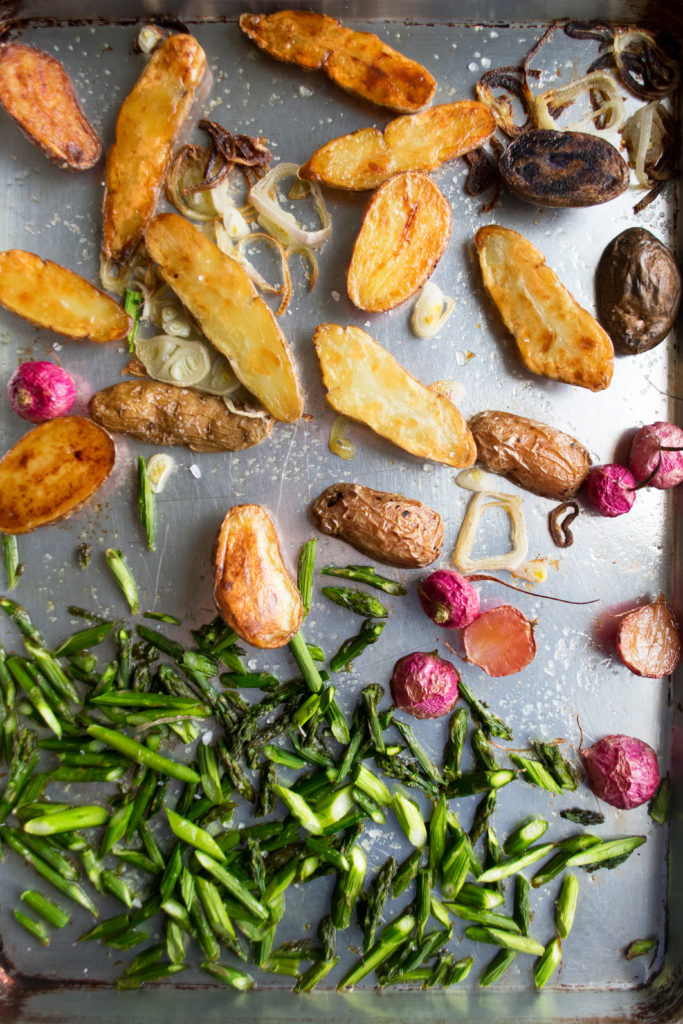 Quick + flavorful dinners have been such a savior during this time when we’re cooking SO much at home. I’ve of course been doing a lot of experimenting, but I’ve also been relying on some simple staples. Those meals you make so often that you don’t have to even think about it.

This seared strip steak with crispy potatoes is exactly that kind of recipe. It makes just enough for two people, so my roommate and I have been enjoying this a LOT. I’ll usually make the steak and potatoes, and then change up the sauce – either this tangy mustard sauce or a simple chimichurri.

Both are great and add that perfect pop of acid and freshness to the dish. And that’s all the steak and potatoes really need. 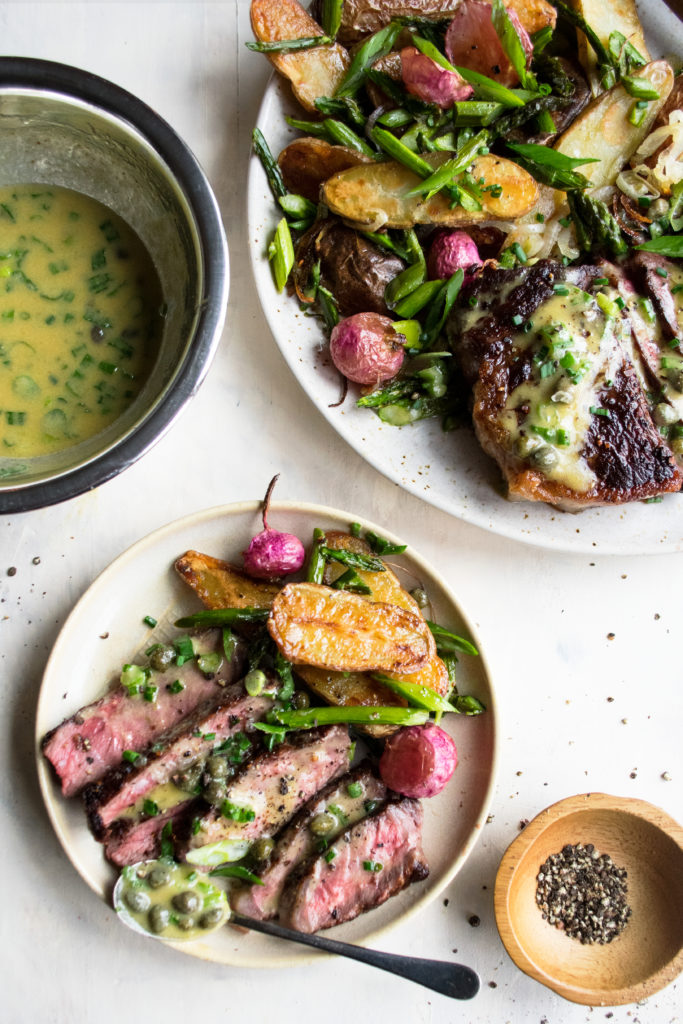 The steak is cooked really simply, with just a generous seasoning of salt and pepper. You’ll want to let the meat come to room temperature before cooking, so it cooks evenly and results in a really tender piece of meat. I did mine in a stainless steel pan, but you could of course use a cast-iron skillet or even grill the steak as well.

I started making versions of the crispy fingerling potato mixture ever since I shared these scrambled eggs with the potatoes and bacon. We’re basically roasting the potatoes off and adding asparagus and shallots halfway through the cooking process. By the end, everything comes out golden and tender. The key is to keep lots of space between the potatoes so that they crisp up. You don’t want to overcrowd them or they’ll steam and have trouble getting that crispy exterior.

The final touch that brings it all together is the mustard sauce. It’s flavored with honey, capers, cayenne, and scallions to add to the zippy bite of the dijon. I suggest drizzling it over both the steak and potatoes. So so good. 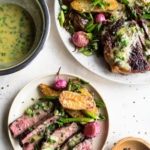 In order to get a nice crispy exterior on the potatoes, make sure you arrange them onto the sheet pan with enough space between them (about 1” apart). This way they won’t steam and remain soft. 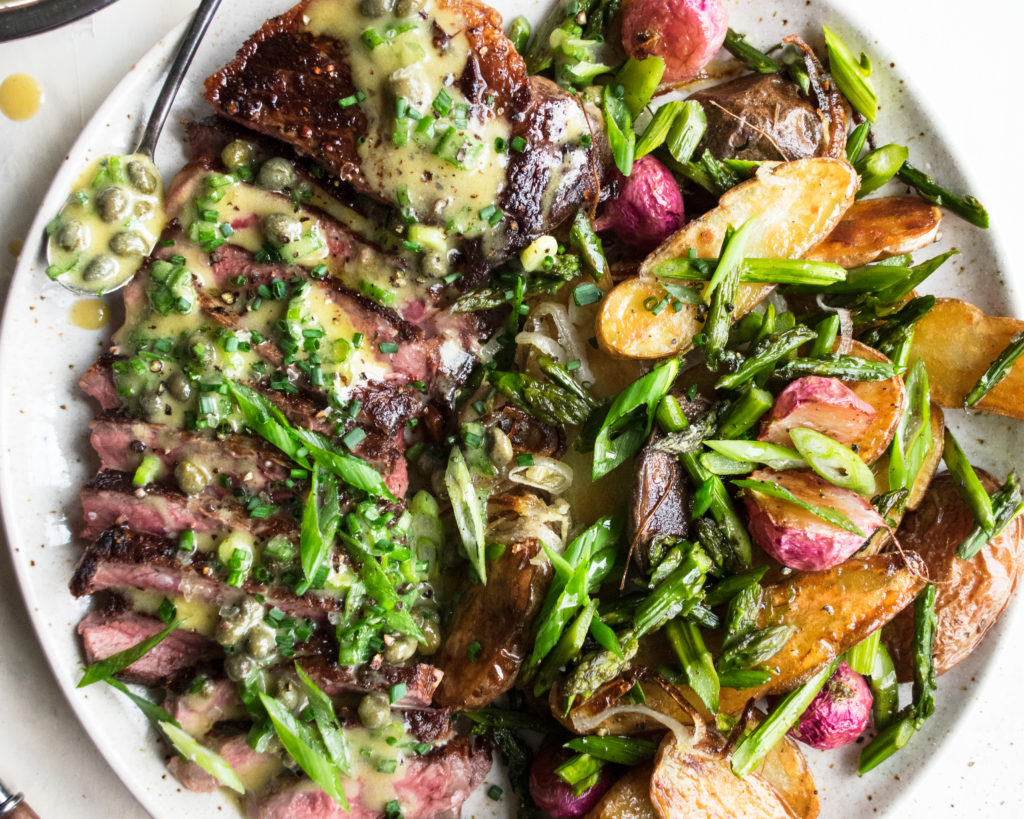