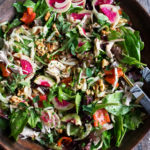 I’ll typically make this salad just for myself and eat it over 3-4 days. To do so, prep the chicken, red peppers, and walnuts. Make the vinaigrette. Slice the fennel and watermelon radishes. Store all of the ingredients separately. Assemble each salad as needed with a little bit of every ingredient in a mixing bowl. Drizzle in enough vinaigrette to your desired consistency. Cut the herbs fresh and sprinkle over top.