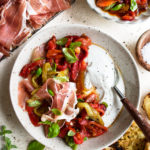 You could use any variety of peppers you’d like. I mainly used red bell peppers, but I had also found some mild anaheim peppers so tossed those into the mix as well!