December is here! I’m celebrating my favorite time of year the only way I know how…by cooking with all of the flavors that remind me of the holidays, all month long. So light a fire, grab a blanket, and cozy up for a December full of wintery treats. I’m starting off with the most important meal of the day: breakfast! And with a breakfast like this, it’ll feel like Christmas morning is already here. 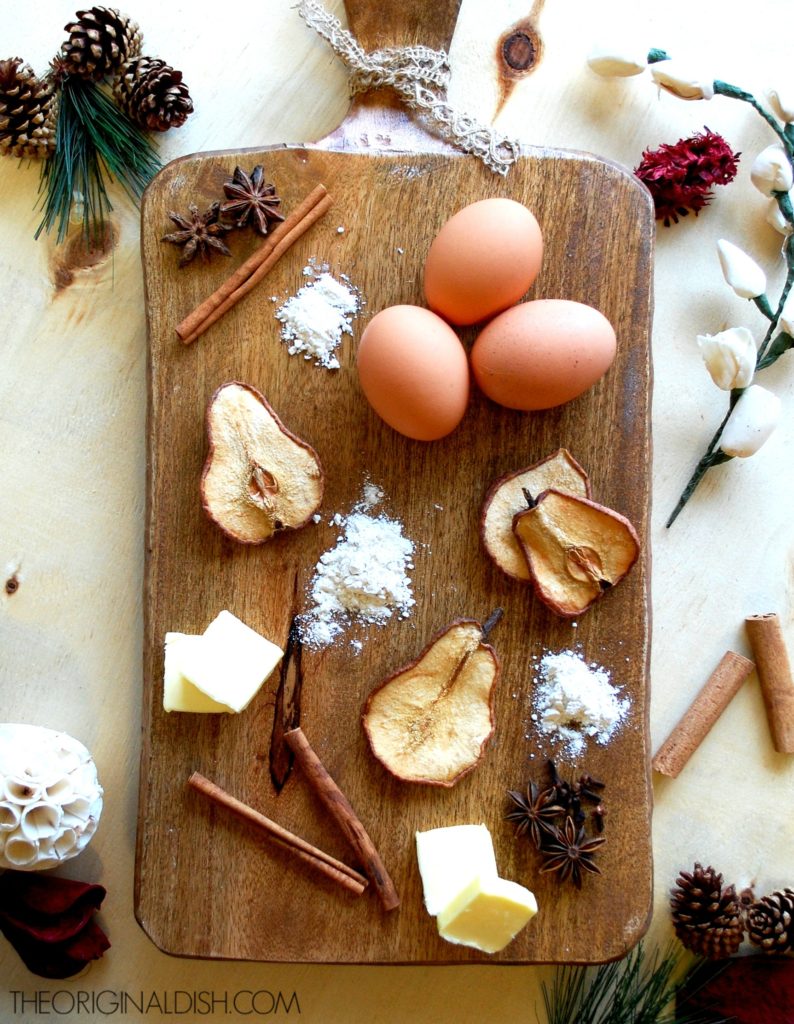 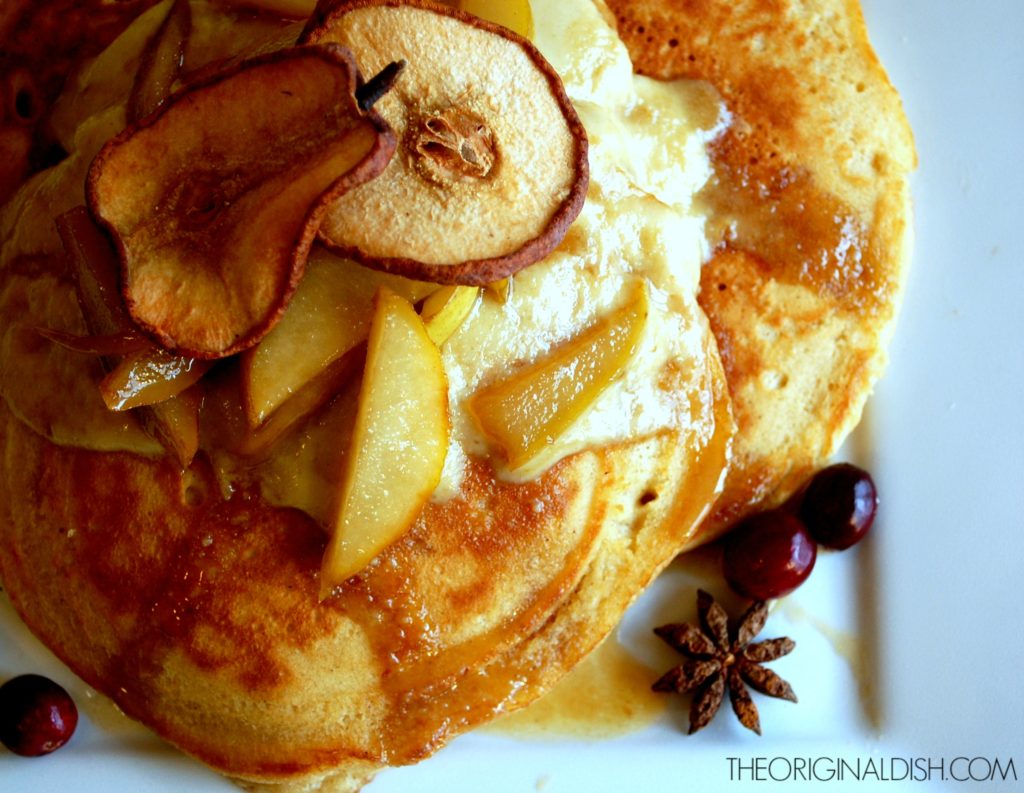 I often make pancakes for our family breakfasts, but I’m never quite satisfied with how they turn out. Always yearning for something better, I decided to give it another try. The result? Well, my dad said they were the best pancakes he’s ever had, so I’m going to take his word for it. I use brown sugar in the batter for a deeper flavor. The brown sugar combined with melted butter make these pancakes extra special. A little nutmeg goes a long way to give a subtle spice to every bite. Once the batter is combined, I ladle out a fairly large amount onto a griddle and cook until just golden brown on each side. They’re fluffy and indulgent, a great go-to batter to have. 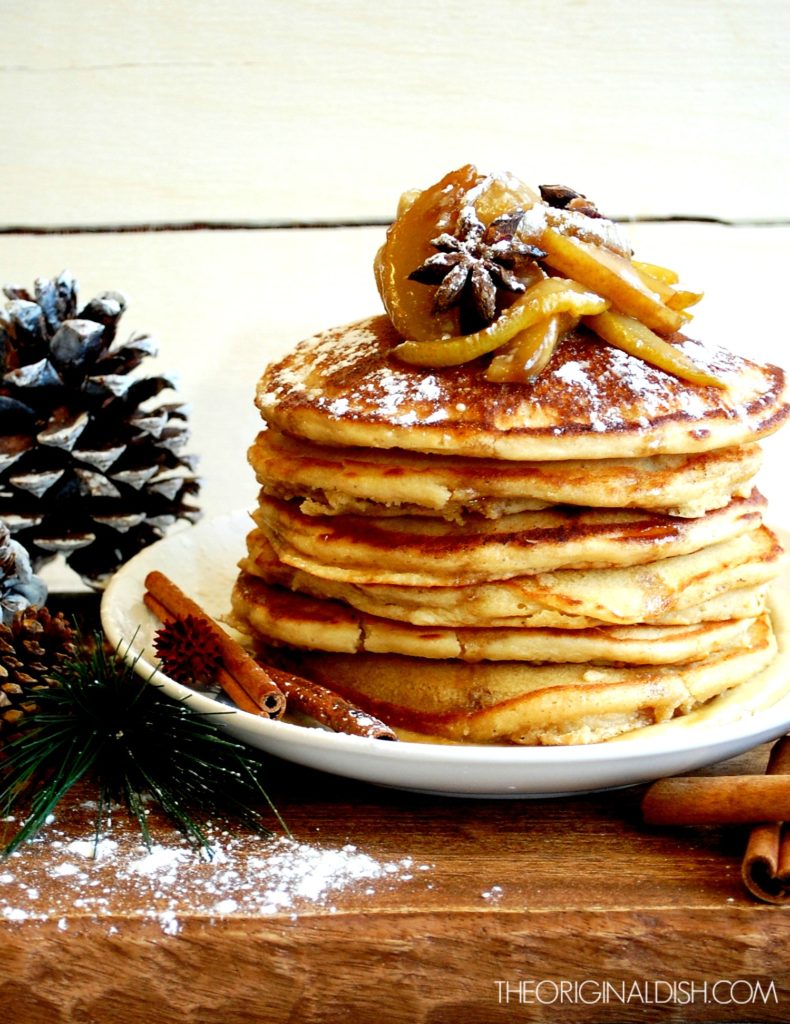 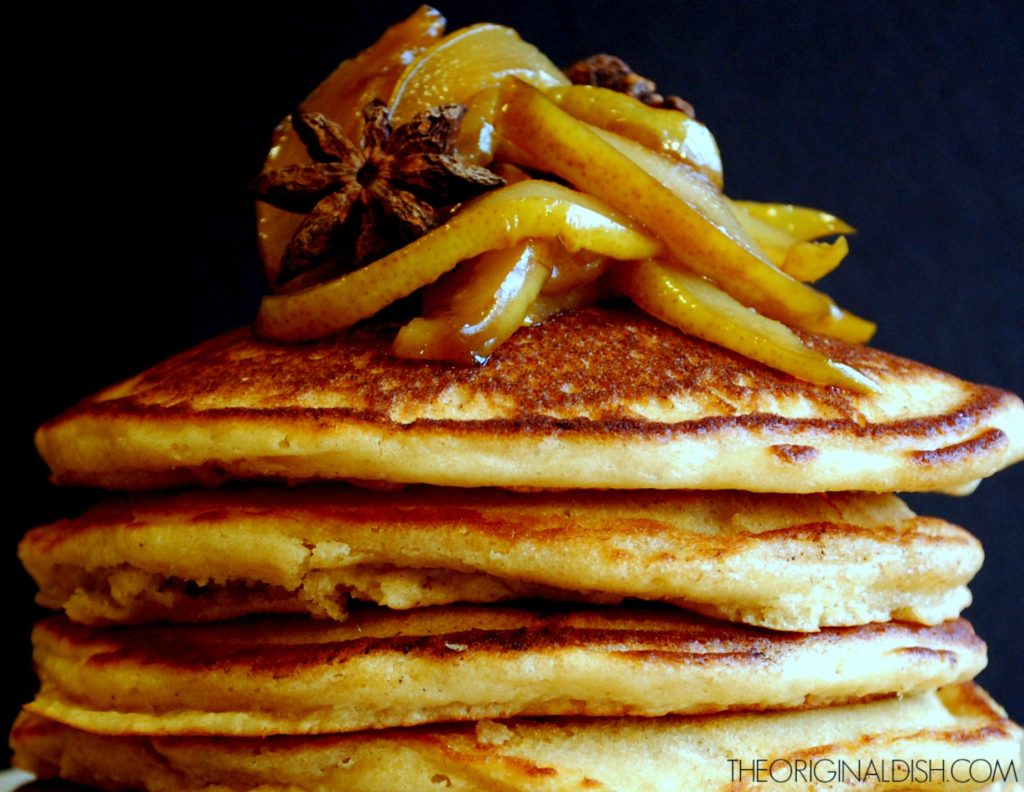 I made the pancakes somewhat plain just so I could add a ton of flavor on top. My grandma always talks about the Italian tradition of roasting chestnuts for Christmas, so I was inspired to make a chestnut cream for the pancakes. I start by roasting them in a hot oven, and let me just say, be careful! I’ve exploded many batches before (the nuts literally explode) because I skipped over the crucial step of cutting into the chestnuts before they roast. You’ll want to make an X through the skin, barely piercing the flesh, using a very sharp knife. This will allow steam to escape and prevent the clean up of a large mess. 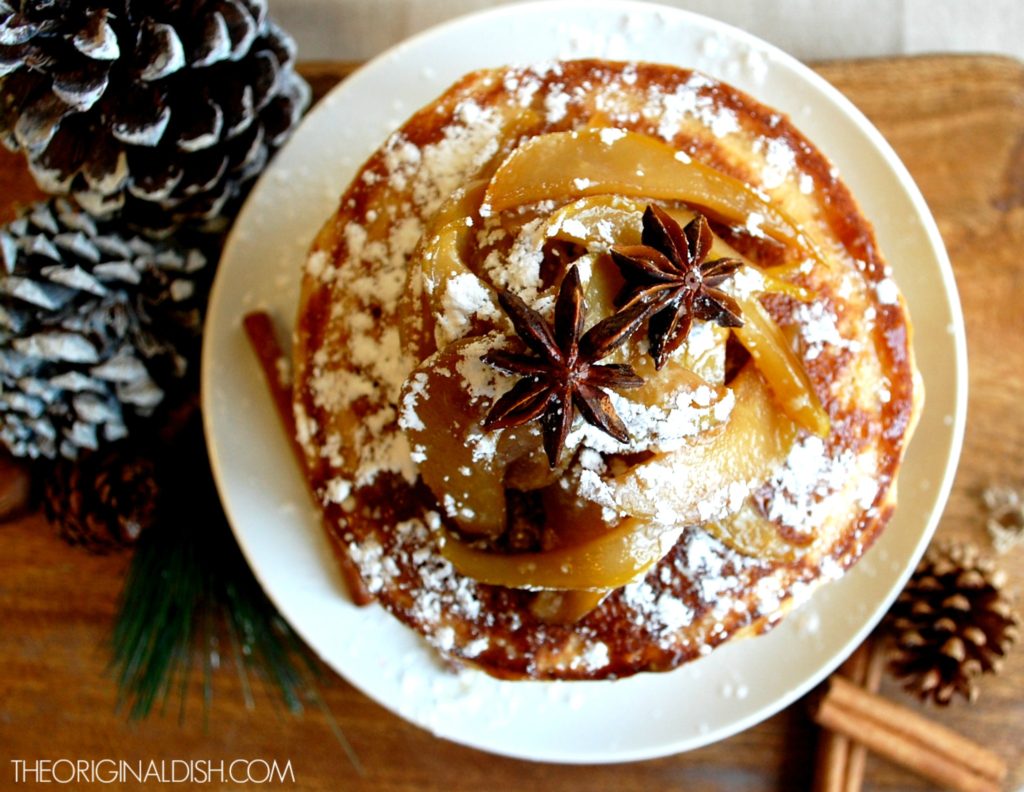 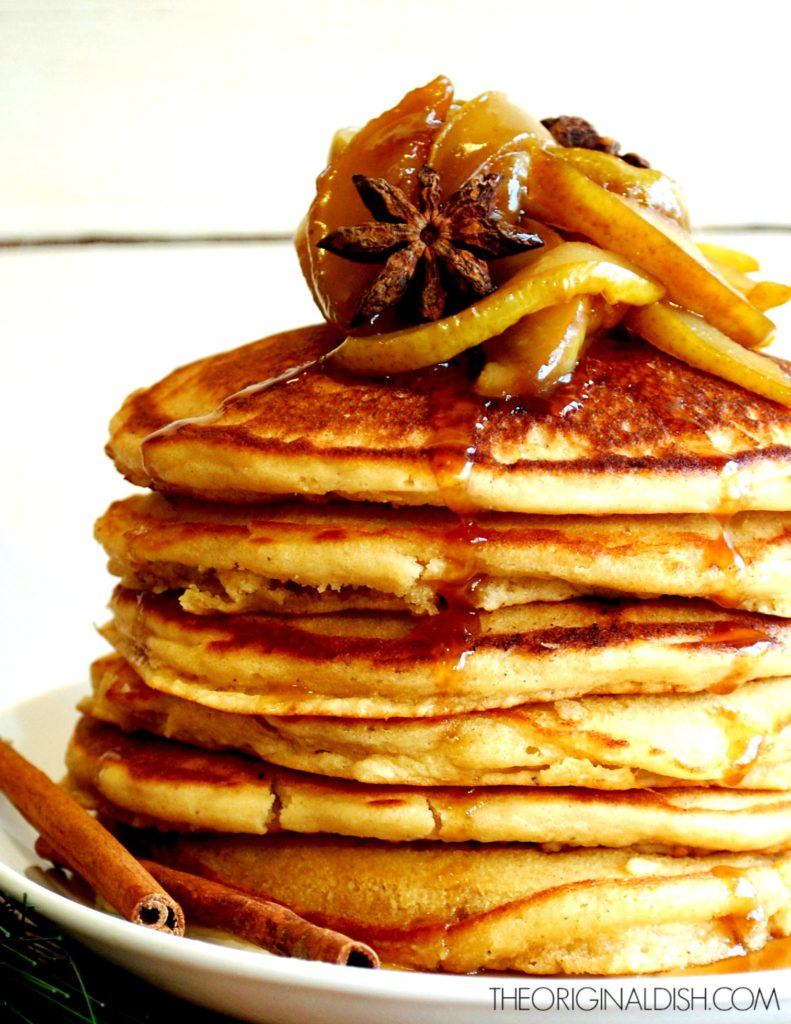 Once the chestnuts are roasted and peeled, I simmer them in milk and puree them. I make a custard base using both the infused milk and the pureed chestnuts. This mixture is cooked just like a crème anglaise, whisking egg yolks and sugar before tempering with the cream mixture. Once cooked to coat the back of a spoon, the mixture must be strained because the chestnut puree is thick and somewhat course. (The texture of the cream won’t be completely smooth, but the flavor is worth it.) This cream is a rich and decadent accompaniment for the pancakes, now all they need is a little syrup! 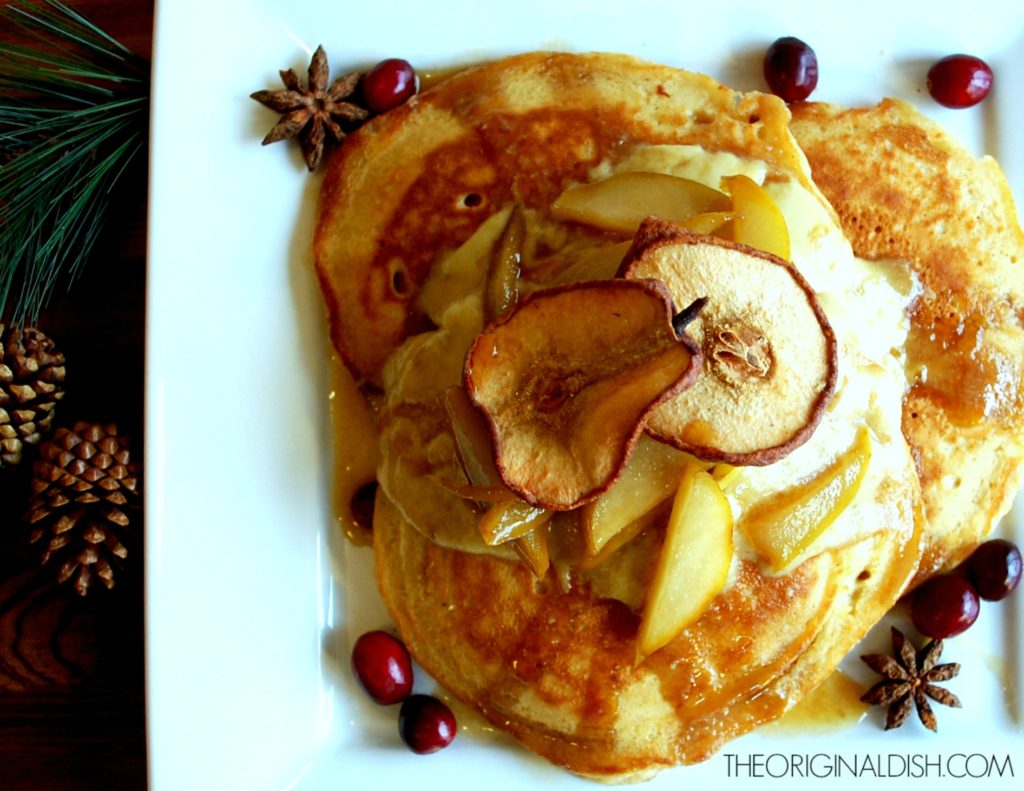 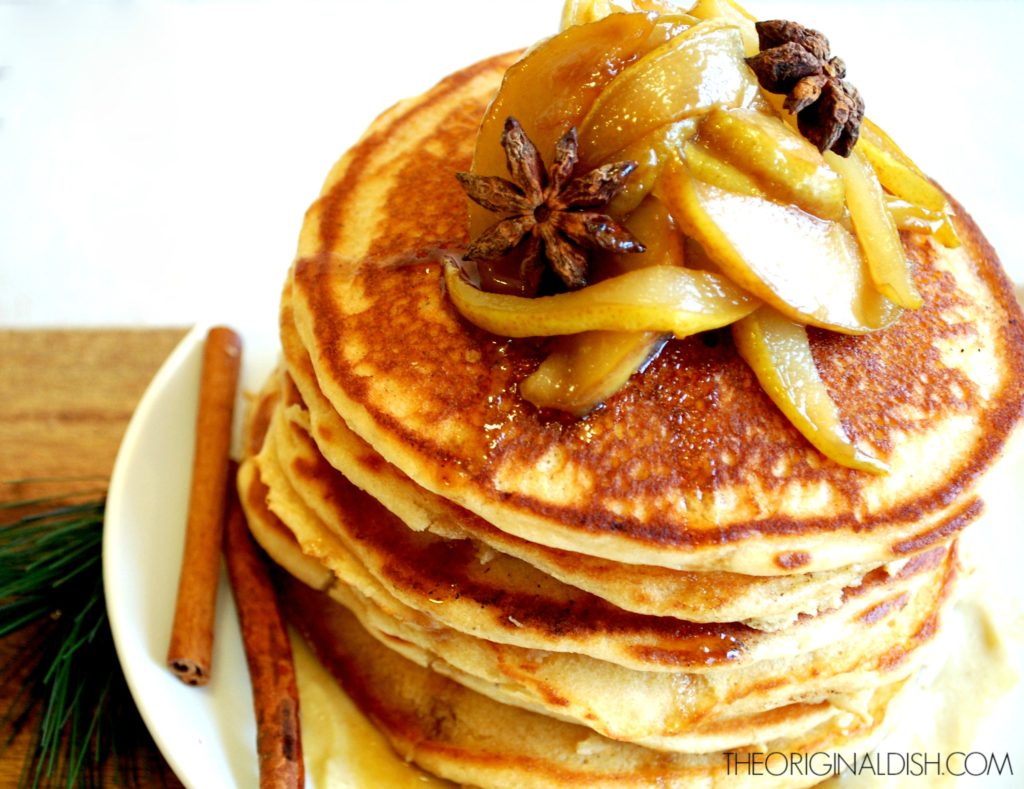 The syrup is really simple to make, but the flavor is what truly makes these pancakes a wintertime delicacy. I start by slicing pears thin enough to soften and thick enough to hold their shape when cooked, a perfect balance. I heat up some butter until it is just browned and toss in the pears. Brown sugar creates a syrup and carries on the flavor of the pancakes. And now, the spices! A cinnamon stick, whole cloves, and star anise add a wonderful warm spice to the syrup, infusing all of their flavor into the pears. This syrup combined with the chestnut cream will have you making this recipe all winter long! 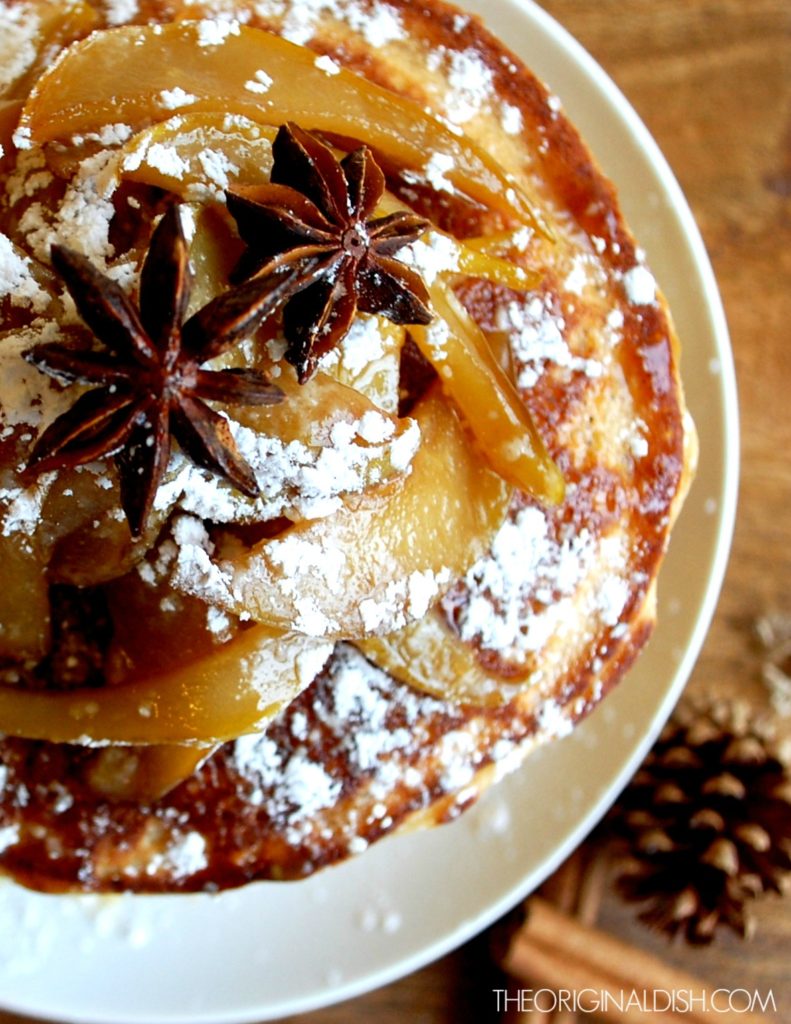 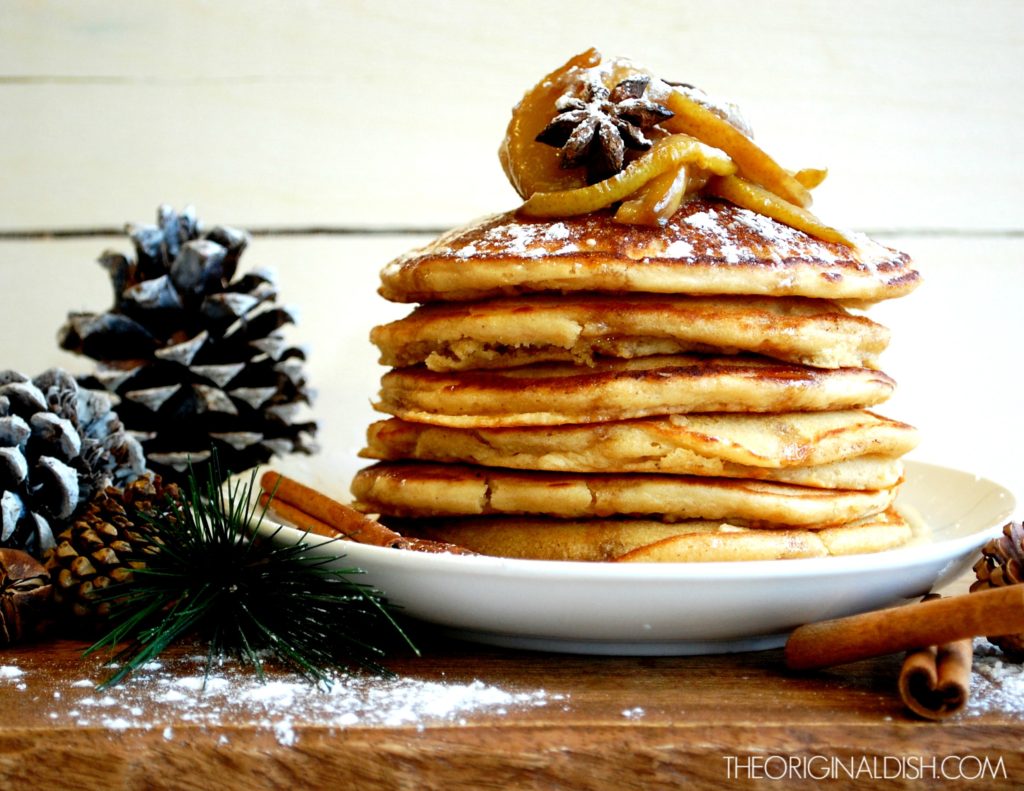