A rustic parmesan & caramelized onion crostata to add to your summer menus this season! It’s the perfect accompaniment to some grilled meat and a big salad. Flaky, buttery homemade parmesan dough surrounding sweet caramelized onions and baked until golden. Topped with more freshly grated parmesan cheese. The flavors are simple, but it is oh so delicious. 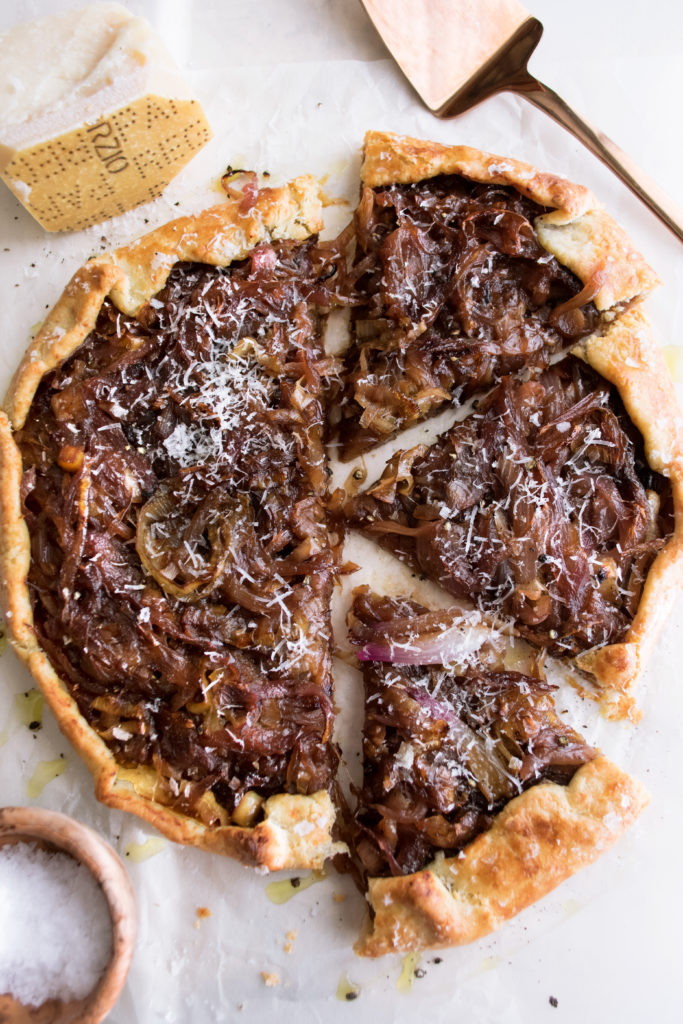 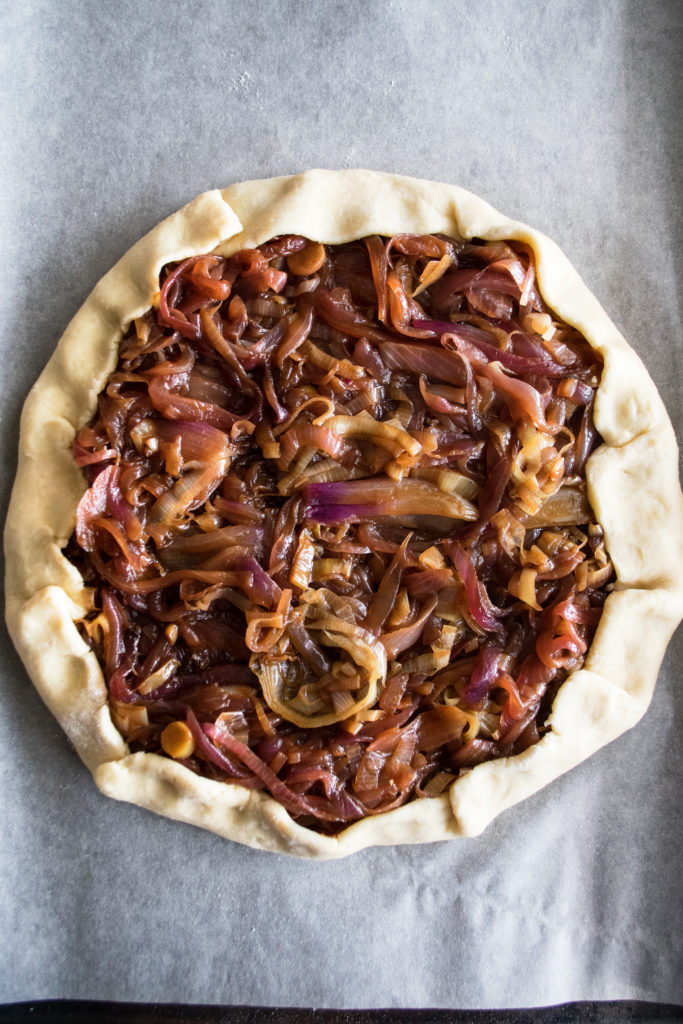 During the summertime, I absolutely love making galettes or crostatas for a simple, rustic dessert with different seasonal fruits. This honey strawberry galette is my go-to. They’re versatile and highlight in-season produce so beautifully. I wanted to create a savory recipe, one that would perfectly complement some meat on the grill.

Caramelized onions seemed like the best way to go. And the result was this mouthwatering parmesan & caramelized onion crostata that I hope will become a staple side dish for you! 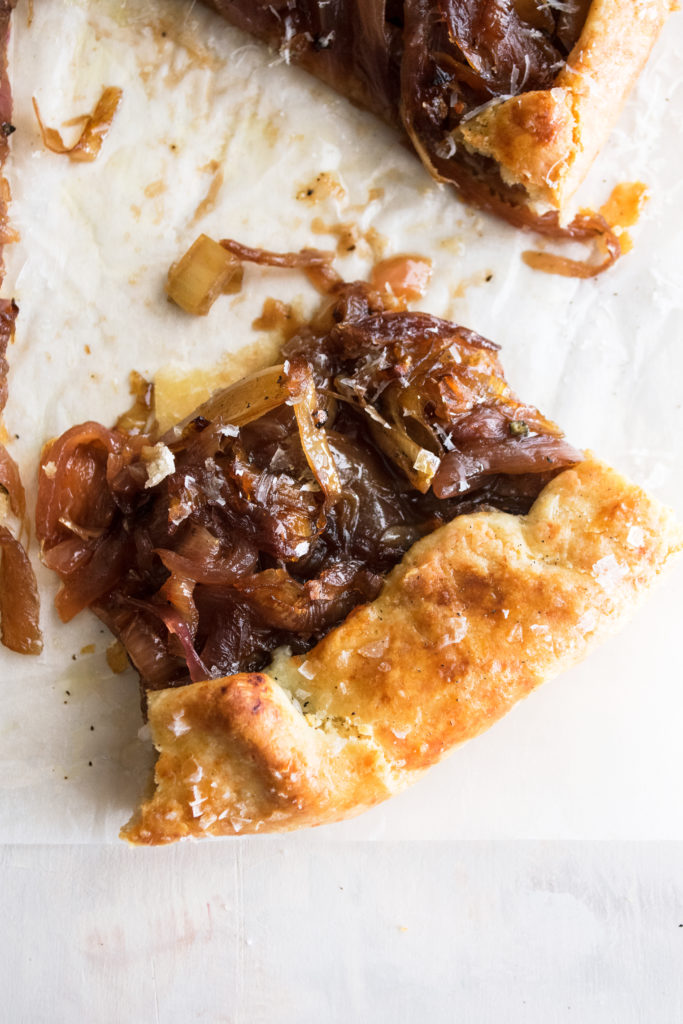 The crostata process starts by making a simple dough. I swapped the sugar in my sweet recipe for a little bit of parmesan cheese to make the overall flavor of the crostata more savory. The entire thing comes together in the food processor, making this somewhat of a fool-proof dough. You’ll mix it up, press it into a flat disk, and then chill it for about 45 minutes. You want the dough nice and cold when it hits the hot oven so it turns out as flaky as possible.

Meanwhile, you’ll caramelize some onions on the stovetop. I’m using a combo of red onions, leeks, and shallots for a mix of onion flavor. Use what you have. Vidalia onions would be great as well. Along with olive oil and salt, we’re adding a little balsamic vinegar and honey to help the rich onion flavor shine through.

Once the dough has chilled and the onions have cooled, you’ll assemble the crostata on a sheet pan, brush the edges with an egg wash + a pinch of flaky sea salt, and bake until golden. Easy as that. It should be rustic and kind of messy, with lots of parmesan grated over top.

Serve it with this grilled flank steak or maybe these grilled lamb chops, with a refreshing cucumber salad on the side! 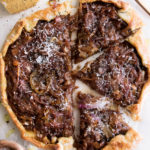 a simple crostata made of flaky, buttery homemade parmesan dough and caramelized onions baked until golden 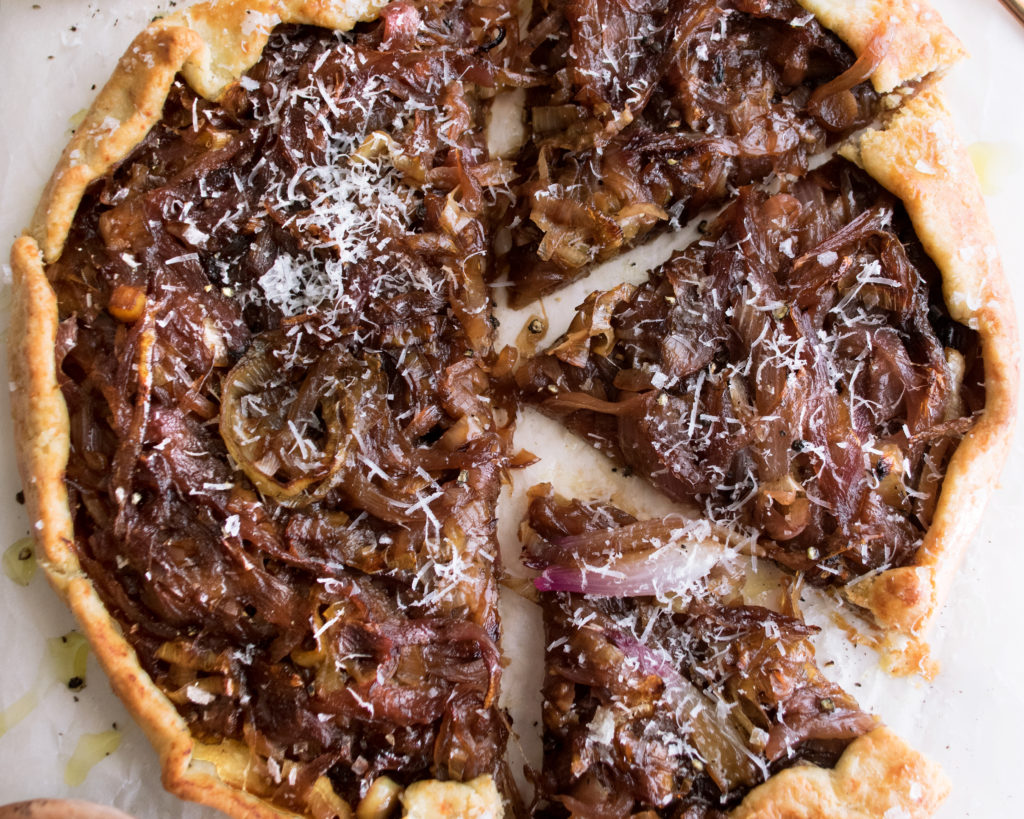